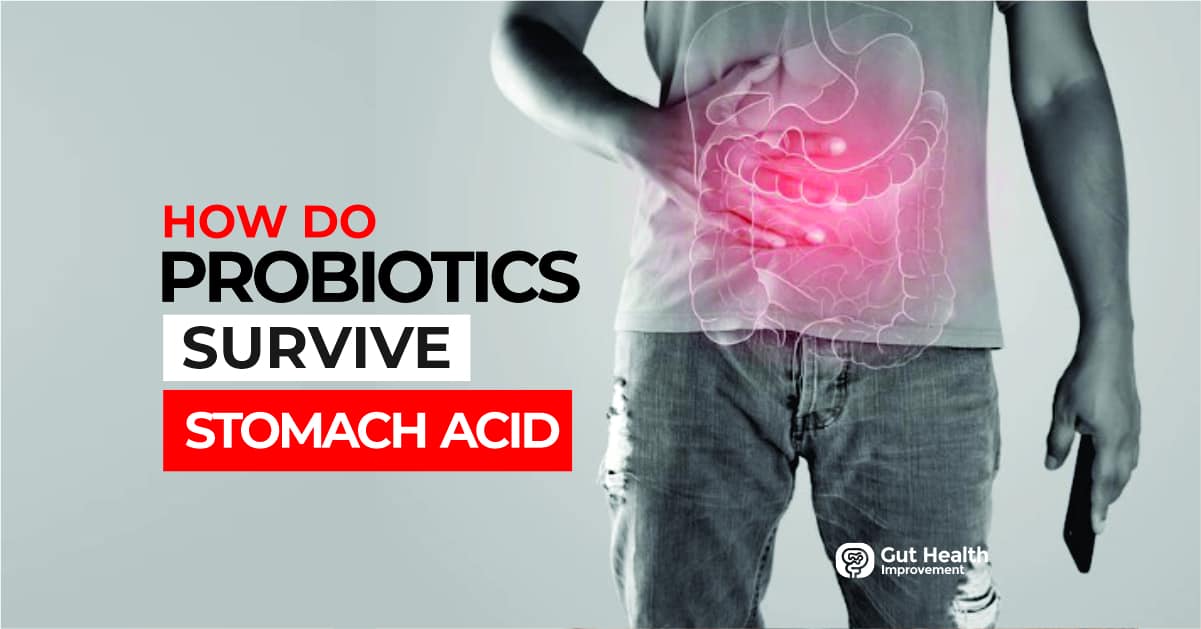 Probiotics play a significant role in disease prevention and treatment, yet they’re only effective if they reach your intestines. To reach their destination, they have to survive your stomach acids – but how can they do that?

Studies have shown that probiotics can survive stomach acids through the following:

Let’s take a look at each of these below.

To truly understand how we can help probiotics survive our stomach acids, it’s important to know what kills them in your gut. Remember that probiotics are live microorganisms. They’re sensitive to heat and chemicals, particularly the acids that our stomachs release to digest food.

In short, exposure to stomach acids can kill them.

So, to survive the journey down to the intestines, they should be protected from these stomach acids.

How to do that? Let’s talk about each method below.

While doing research, I discovered that the following are some of the ways that probiotics can survive this challenging journey.

A 2005 study published in the journal Applied and Environmental Microbiology identified Lactobacillus species as intrinsically resistant to acid.

This means that Lactobacillus species can naturally resist acid, including stomach acids. According to this study, the human-derived strain Lactobacillus rhamnosus GG has been shown to survive passage through the gut in both children and adults.

Quite amazingly, this probiotic species can survive pH values as low as 2.5 for 4 hours (the neutral value is 7).

Other Lactobacillus strains used in the study were poor survivors and were completely gone within just 30 minutes of acid exposure. That means that they wouldn’t likely survive the journey through the stomach.

Of course, this doesn’t mean that the Lactobacillus strains that didn’t survive stomach acids aren’t good as probiotic supplements because there are other ways to help them make it.

That takes us to this next tactic.

According to the 2005 study above, for better probiotic survival rates during transit through the gut, manufacturers add components such as milk and milk proteins, cereal extracts, reconstituted skim milk with gum acacia, and even cheese and yogurt.

These components are supposed to protect the probiotics with their buffering capabilities.

Other manufacturers found it better to use encapsulation techniques, especially with delayed-release formulations. Using this method, the probiotics are coated with materials known to survive stomach acids, then released in the intestines where they belong.

This kind of technique is used in probiotics supplements such as YourBiology Gut+, which uses patented MAKtrek Bipass Technology derived from brown seaweed in their delayed-release capsule.

Some researchers believe that taking probiotics with food is ideal, particularly those that contain at least 1% fat.

Tactic #4: Taking On An Empty Stomach

Other studies also show that it might be best to take probiotics 30 minutes before a meal.

For example, in a 2011 study in Beneficial Microbes journal, probiotics were shown to have a higher survival rate if taken at least 30 minutes before a meal, but less likely to survive if taken 30 minutes after a meal.

It’s up to you to decide whether to take it along with fatty foods or on an empty stomach.

But make sure to avoid taking probiotics 30 minutes after a meal just to catch up if you forget the dose. The high concentrations of stomach acids at this point are likely to kill those probiotics instantly.

The good thing about microbes in probiotics is that if they really do reach your intestines, they can easily multiply if the conditions are right. So, taking a higher dose, with bigger CFUs (colony-forming units), can give them a better fighting chance.

Check the label of your probiotic supplements to find the CFU. For example, Bauer Nutrition Biotics 8 supplement has 20 billion CFUs, while YourBiology Gut+ contains 40 billion CFUs.

In the 2005 study mentioned above, the researchers also discovered that probiotics, particularly Lactobacillus rhamnosus GG, appear to have better survival rates when taken in the presence of glucose (sugar).

This could be the reason why some probiotic makers use sugar in their products, including Yakult drinks.

While taking probiotics, it’s a good idea to avoid coffee. But you don’t have to avoid it altogether. What’s important is to space them out.

Coffee won’t directly kill your probiotics unless you actually mix hot coffee and the probiotic drink or pill together.

However, coffee can affect your gut in several ways, making it a harsher environment for your probiotics. Coffee is acidic, so it can further raise the acid level in your gastrointestinal tract.

But if you can’t live without coffee (yeah, me too!), it’s best to simply wait at least 30 minutes after taking your probiotic supplements before having a cup.

Tactic #8: Finding The Right One (here’s why that’s important)

Not all probiotics are created equal.

Finding the right one is crucial in ensuring that they are of high quality, the probiotics listed on the label are really there, and that the CFUs holds true for the products that reach your home.

Probiotics aren’t regulated by the FDA (US Food and Drug Administration), so there’s really no telling if these brands are telling the truth about what’s inside their products and if the CFUs remain the same from the manufacturing process through storage and transit to consumers’ homes.

It’s best to stick with trusted brands like Bauer Nutrition Biotics 8 (probiotics for men) and YourBiology Gut+ (both men and women).

Can All Probiotics Survive Stomach Acids?

No. Not all probiotic species survive stomach acids. Even within the Lactobacillus species known to be naturally resistant to acids, only a few have been shown to resist and survive the harsh acids in the stomach.

So, which ones are more likely to reach your intestines? Let’s take a look at them in the next section.

According to the 2005 study mentioned above, Lactobacillus rhamnosus GG can survive pH values as low as 2.5 for as long as 4 hours.

Even at pH 2.0 (in simulated gastric juice), Lactobacillus rhamnosus GG can survive for up to 90 minutes.

The researchers also indicated that Lactobacillus paracasei NFBC 338, had the lowest survival rates among the Lactobacillus strains they tested.

In a 2015 study published in the Microbiology and Immunology journal, Lactobacillus casei strain Shirota (the same one used in Yakult), might also survive stomach acids.

In Japan, spore-forming probiotics (such as Bacillus coagulans) are used in probiotic products because the spores are believed to survive stomach acids.

How Do Probiotics Get Past Stomach Acid?

With the exception of Lactobacillus rhamnosus GG, which can survive for up to 90 minutes at pH 2.0 or 4 hours at pH 2.5, the other probiotics are only likely to get past the stomach acids if they’re inside a protective material.

These protective materials can be special capsules made with enteric coating. This material remains intact in the stomach but dissolves in the small intestines, releasing your probiotics where they’re likely to survive and thrive.

Which Probiotics Can Survive Stomach Acid?

Studies show that Lactobacillus rhamnosus GG has a best chance of surviving stomach acids than other Lactobacillus or probiotic strains.

Do The Probiotics In Kombucha Survive Stomach Acid?

Kombucha is actually acidic. It’s typically brewed at around pH 2.5 to 3.5.

In comparison, the stomach is normally at around pH 3.5 when not digesting food, but can go as low as pH 1.5 during digestion.

Logically, kombucha has a chance to survive stomach acids if taken before eating because it has a similar pH to a typical empty stomach.

Like other probiotics, however, the live microbes in kombucha can die if they are exposed to the highly acidic environment of your tummy around 30 minutes after eating.

Are Probiotics In Yogurt Killed By Stomach Acid?

Yogurt contains milk or milk products that are believed to buffer the stomach acids, possibly increasing the chances of the probiotics surviving. Of course, like kombucha and other probiotics, your best bet is to take this on an empty stomach so that the acid levels aren’t too low.

Do Probiotics In Kefir (and Tibicos) Survive Stomach Acid?

A 2021 study published in the journal Frontiers in Microbiology showed that water kefir or tibicos can survive the harsh conditions in the upper gastrointestinal tract.

However, the study also pointed out that they’re best consumed within 28 days. This could mean that kefir might work best when freshly made, but its probiotic content could become less effective as the weeks go by.

Yakult contains sugar and milk materials. Based on the 2005 study mentioned above, this could make this product more likely to survive stomach acids than similar probiotics that don’t contain sugar or milk.

The 2015 study mentioned above showed that Lactobacillus casei strain Shirota, the probiotic strain in Yakult, can survive stomach acids.

Sauerkraut was also included in the 2021 study mentioned above. Just like water kefir or tibicos, it also has a good likelihood of surviving stomach acids.

The good news is that the probiotics in sauerkraut can last longer than those in tibicos because they’re best consumed until 7 weeks.

Have you ever wondered if the honey in your pantry kills the beneficial bacteria in your gut? The short answer is no, but there's more to the story. Honey may kill certain bacteria, but it's not...

Many people take probiotics for their health benefits, but some may be concerned about the potential negative effects of vitamin C on these beneficial bacteria. While it is true that high doses of...