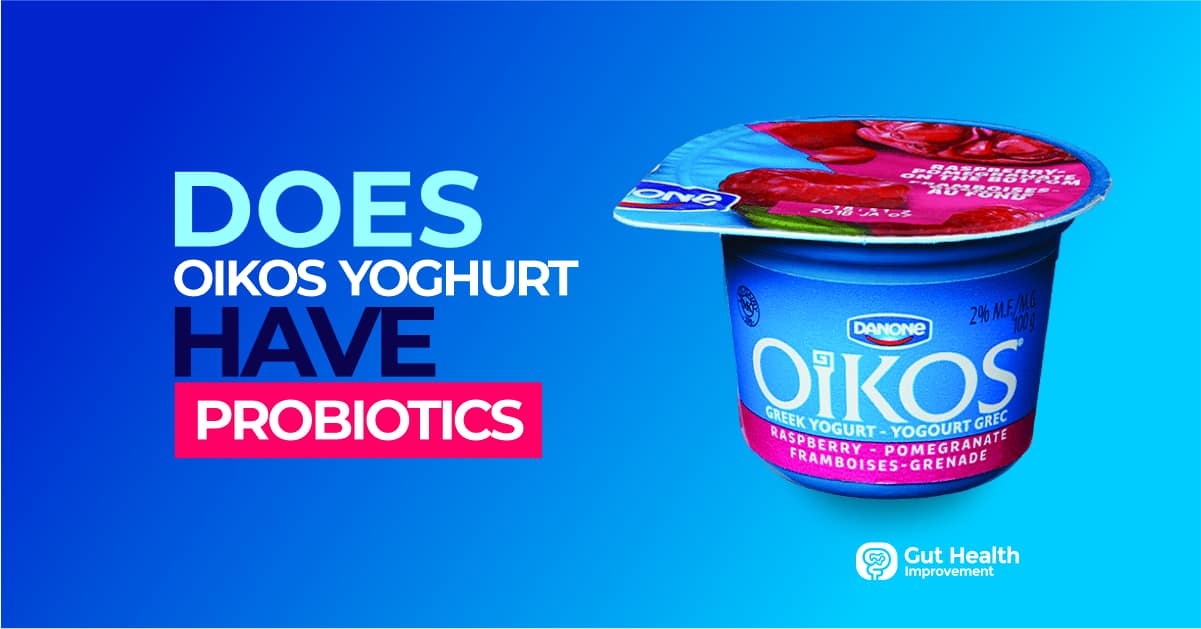 Many people associate yogurt with probiotics but do all yogurts really have probiotics? What about Oikos Greek yogurt?

The answer is no. Not all yogurts have probiotics because Oikos Greek Yogurt doesn’t have them. However, this yogurt has yogurt cultures: Streptococcus thermophilus and Lactobacillus bulgaricus.

That might sound confusing. After all, Streptococcus thermophilus and Lactobacillus bulgaricus are well-known as probiotic strains!

So, why is Oikos yogurt declared as a non-probiotic by its manufacturers even if they contain probiotic strains?

Let’s dig deeper into that question below.

Does Oikos Yogurt Have Probiotics?

All yogurts, including Oikos yogurt, start out with some form of probiotics.

You might even notice that the labels on these probiotics show that they were made with probiotic strains, particularly the commonly used Streptococcus thermophilus and Lactobacillus bulgaricus.

For example, Dannon Oikos yogurt’s label even states it meets National Yogurt Association criteria for “live and active culture yogurts.” This means that this yogurt contains at least 100 million probiotic cultures per gram at the time that it was manufactured.

But why does Oikos Yogurt declare that they don’t have probiotics in their product, even if it contains the Streptococcus thermophilus and Lactobacillus bulgaricus strains?

We can’t argue with the manufacturer, of course, and say that these yogurts have probiotics when they themselves declared that the products are non-probiotic.

The answer is that while most yogurts start out with having a minimal level of live and active cultures to meet the criteria, some of them are heat-treated. Heat kills off most of the live probiotic cultures.

While some of these probiotics might still survive the heat, they’re likely to be too few to be considered viable.

This appears to hold true for the following products:

Let’s take a look at the strains in these Greek yogurt products below.

What Are The Yogurt Cultures in Greek Yogurts? (like Oikos Yogurt)

Oikos yogurts are Greek yogurts. Just like your regular probiotics, they can have different probiotic strains.

As mentioned above, Oikos Yogurt contains:

Dannon Oikos Yogurt declares that it contains “active yogurt cultures” but doesn’t specify which ones are used in making this product.

Benefits of Eating Oikos Yogurt (even without probiotics)

Greek yogurt differs from other yogurts because it undergoes a special process that removes the whey. Even without probiotics, they can still be good for your health.

Some benefits of eating Oikos yogurts:

Studies have conflicting results, but these kinds of yogurt might also help reduce blood pressure and the risks of type 2 diabetes.

How many yogurts Should I Eat For Probiotics?

Although yogurt contains probiotics, studies have shown that even probiotic yogurts don’t contain enough of the good bacteria strains to actually provide health benefits. That’s according to a report on CTV News.

Mary Scourboutakos, a study author interviewed in the report, explains that their research showed these yogurts can contain 25 times fewer probiotics than what clinical trials have found to be effective.

That means that you might need to eat 25 servings of yogurt to have the same amount of probiotics as a serving of a probiotic supplement!

Can you eat that much yogurt in a day? Neither do I!

How Do I Know If My Yogurt Has Lactobacillus?

You can’t really tell just by looking at it because probiotics are bacteria – that means that they’re microscopic. The only way to tell is to check the label.

Does Oikos Plain Yogurt Have Probiotics?

Oikos plain yogurt is a healthy product, but according to the manufacturer, it doesn’t contain probiotics.

It contains yogurt cultures Streptococcus thermophilus and Lactobacillus bulgaricus strains, but that’s likely much lower than what’s required to be considered a probiotic product.

Dannon Oikos Triple Zero Yogurt declares that it contains “active yogurt cultures.” However, the manufacturer doesn’t specify which ones are used in making this product and whether these are available in levels that are high enough for the yogurt to be considered a probiotic.

Does Oikos Yogurt Have Lactobacillus?

What’s The Difference Between Yogurt Cultures Vs. Probiotics?

Probiotic products contain cultures of good bacteria and yeast that can have many benefits in our bodies, not just for gut health but also for preventing joint pains, UTIs (urinary tract infections), and high blood pressure.

Yogurt cultures also use the same strains as probiotic products, but they’re often in a much lower quantity than those in regular probiotics. The cultures help change the milk (or other base ingredients) into yogurt, but they can also be “killed off” when the product is subjected to heat in the manufacturing process.

However, their actual differences and status are the subject of debate, even in the scientific community.

According to a 2005 review in the British Journal of Nutrition, yogurt cultures contain live microorganisms.

The review added that several human studies have shown that these products contain viable probiotic strains, such as Streptococcus thermophilus and Lactobacillus delbrueckii sp. bulgaricus.

So, the researchers conclude that yogurt cultures can also meet the category of probiotics.

While Oikos yogurt doesn’t have probiotics, it does contains two beneficial live and active cultures- Streptococcus thermophilus and Lactobacillus bulgaricus. These strains of bacteria work together to improve gut health and promote a healthy immune system.

So, even though Oikos doesn’t have probiotics, it is still a good choice for those looking for a nutritious snack that will help maintain their gut health.

No doubt the fact that a healthy gut is essential for overall well-being. A large portion of our immune system, up to 80%, resides in the intestines and gut. This important ecosystem of bacteria...

Continue Reading
link to Collagen For Gut Health: Does it Improve? (types & benefits)

When you think of collagen (a protein), you often link it to the skin, muscles, connective tissues, bones, and even hair. It can help reduce the signs of aging, such as wrinkled, saggy skin and...