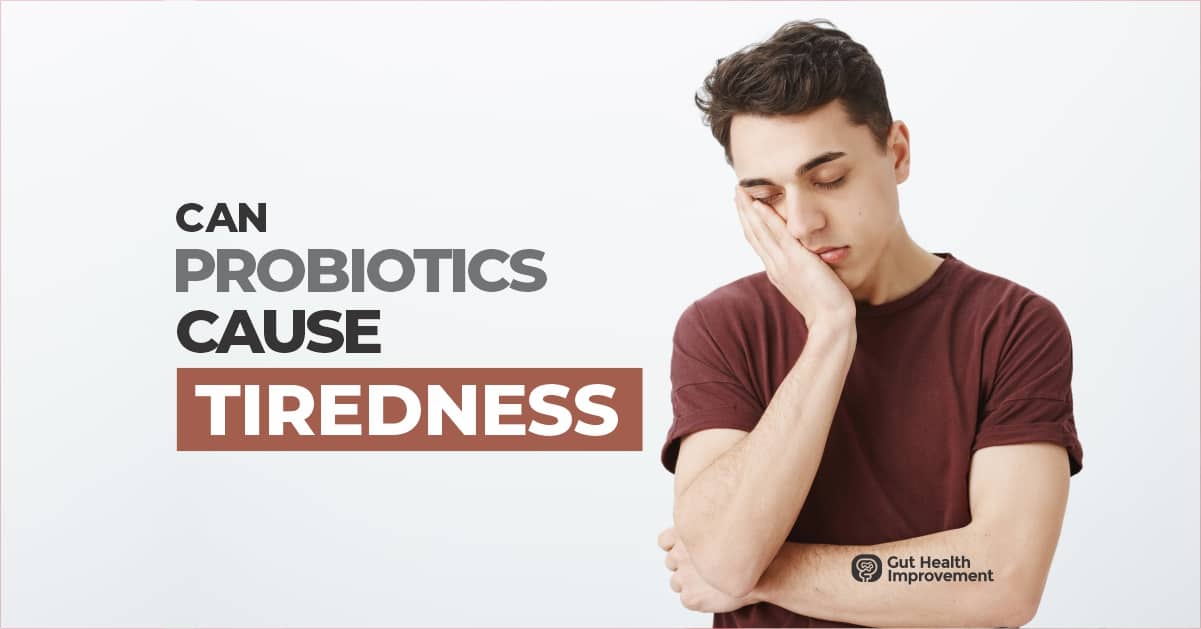 For this article, I have consulted user reviews and scientific papers to find the link between probiotics and tiredness.

If your probiotics are causing you to crash down on your bed, then you are not alone.

Quick Fact: A recent study revealed that older women that have been consistently using probiotics for the past month are more prone to developing probiotic weakness/tiredness.

So, you may feel this way, too, due to the overpopulation of good bacteria in your gut, which may produce metabolites that impact your body functions and drain your energy. Another reason could be that the new colonizers are settling in and killing the bad bacteria during the process, releasing toxic gases that may make you weary.

In this article, I will provide a scientific explanation of how probiotics impact your energy levels and if the users have also experienced low energy due to them.

So, keep reading to learn all about it.

You may feel fatigued after taking probiotics for many reasons, such as Small intestinal bacterial overgrowth (SIBO), D- lactic acidosis, or due to Jarisch-Herxheimer Reaction.

Here lactic acidosis is referred to the condition in which lactic acid accumulates in the body, and it may cause extreme tiredness, fatigue, and weakness.

As for SIBO, it may occur due to excessive bacterial colonization, but scientists have yet to conclude why some people who consume probiotics have a higher chance of developing it than others.

Even so, it cannot be generalized, but using opioids or proton pump inhibitors or having constipation or small bowel syndrome may increase your risk of SIBO.

Apart from this, the Jarisch-Herxheimer reaction occurs when the probiotic bacteria take over your gut and kill the harmful bacteria in large numbers.

The dying pathogens may release toxins and overwhelm your system, which may cause side effects such as exhaustion.

Here’s a further explanation of this:

Overproduction of D-lactic acid by a lot of bacteria in your gut may be the reason why you feel exhausted.

This can be explained by a 2018 research in which Rao et al. discovered that 94% of the 30 brain fog patients who had been consuming probiotics for the last 3 months or three years suffer from fatigue and weakness that worsens after eating, especially after a carbohydrate-rich meal.

Furthermore, 63% of these patients had SIBO, whereas 80% of them tested positive for D or L- lactic acidosis.

These conditions may occur if lactic acid bacteria like Streptococcus thermophilus, Lactobacillus, or Bifidobacterium species over-colonize the gut. These bacteria rush to ferment the carbohydrate or sugars we consume, generating D-lactic acid as a by-product.

However, as the liver does not remove D-lactic acid as efficiently as L-lactic acid, it may accumulate in the body, causing D-lactic acidosis.

In simpler words, you may understand this phenomenon by imagining the muscle fatigue that may occur after you do a strenuous workout due to lactic acid accumulation in them.

To further confirm this hypothesis, the researchers made the patients discontinue their probiotics and prescribed them antibiotics.

As a result, up to 70% of the patients reported significant improvements in their symptoms.

This reaction is commonly associated with antibiotics, but over the years, health professionals and researchers have found that it may be caused due to probiotics as well.

But still, it occurs only if you have severe gut dysbiosis and the probiotic bacteria are extremely successful in establishing themself to a certain threshold.

In this scenario, the good bacteria may kill the pathogenic bacteria causing the Jarisch-Herxheimer Reaction.

But the good news is that it may clear up in 2 to 3 weeks after your gut microbiome stabilizes.

For instance, in this Chinese study, autistic children were administered probiotics to see if they positively impacted their behavior.

However, two children developed diarrhea after two weeks of probiotic intake, but their symptoms resolved on their own by the third week of continuous probiotic use.

Consequently, the authors of the paper justified the results with the reason that it might have occurred due to the bacterial die-off or Jarisch-Herxheimer reaction.

Probiotics Make Me Tired – From Users on Reddit Forum

Now that you have learned from investigations performed by science geeks. In this section, I will help you get a quick sneak into the actual user’s opinion about the correlation between tiredness and probiotic intake.

‘Ann_Fetamine’ wrote in her Reddit post that she was put on an antibiotic course (clindamycin), so she started trying probiotics to prevent gastrointestinal upset and C. difficile infections from happening. However, she soon figured out that 90% of the probiotic strains, including Bacillus coagulans and even yoghurt, make her extremely tired.

Plus, she was not dairy intolerant and had no autoimmune disease but was diagnosed with IBS type C. Besides this, she got no exhaustion-inducing side effects with Align brand (B. infantis) but was doubtful about its efficacy and was looking for any other recommendations.

Side note: This user might be suffering from probiotic-induced SIBO or lactic acidosis.

Because if you recall the information that I provided in the above section, then constipation is a major characteristic of IBS type C, which might cause SIBO.

Second, the align probiotic might not have caused fatigue because studies prove that B. infantis produces less D-lactate than Lactobacillus species (especially L. rhamnosus), and this might be why it is employed in D-lactate-free probiotics as well.

‘RelevantLychee’ shares in her Reddit story that she has GERD, so she started taking the Renew Life Adult Probiotics to diversify her microbiome. But instead, the product drained the energy out of her and made her sleepy.

Can Probiotics Make You Feel Weak?

To prove this, eHealthMe carried out this phase IV clinical trial in which it analyzed the FDA data of 4,346 people who had side effects due to probiotics.

The results revealed that weakness caused due to probiotics is commonly reported by women aged older than 60 years and if they had been taking the pill for more than a month.

Yes, probiotics may help some people boost their energy levels.

For instance, in a recent 2022 study, 24 out of 58 Covid 19 patients received bacteriotherapy with a probiotic formulation, and its outcome on their fatigue was compared with the control group.

The results showed that in the control group, 91% of the participants felt fatigued after Covid recovery, while only 41% of the patients who were administered probiotics had this symptom.

The reason is that the probiotic bacteria may help improve the production and utilization of glucose for energy.

The probiotic blend used in the study had strains from the B. lactis, L. acidophilus, L. helveticus, L. paracasei, L. plantarum, and L. brevis species.

In another study, scientists fed lactic acid probiotics to 10 female and 5 male patients with chronic fatigue syndrome for 4 weeks.

These bacteria included strains in the L. paracasei, L. acidophilus, and B. lactis species.

According to the results, 6 participants reported an improvement in their condition, while the symptoms got worst for one woman and others saw no effect.

Considering this, if you want to try probiotics to tackle your daily exhaustion, then YourBiology and Biotics 8 are two of the best options out there.

The best part about them is that both of these are manufactured in FDA and GMP-registered facilities, so whatever you receive will be of top quality.

Additionally, they contain the lactic acid bacteria that have already been assessed in the above-mentioned studies.

Whereas the Biotics8 contains 10 probiotic strains belonging to the Lactobacillus, Bifidobacterium, and Saccharomyces boulardii species. These also include fatigue-reducing strains like L. paracasei, L. acidophilus, L. plantarum, and L. brevis.

Can Probiotics Make You Feel Worse Before Better?

Can Probiotics Cause Dizziness?

Yes, probiotics may cause dizziness.

Are Tiredness And Fatigue Signs Probiotics Are Working?

Yes, but not all the time. So, if your symptoms don’t resolve within a few weeks, visit a doctor to take his advice or discontinue your probiotics.

Final Thoughts – Why Probiotics Cause Tiredness?

Tiredness caused by probiotics may occur due to D-lactic acidosis, SIBO, or bacterial die-off. In most situations, SIBO and lactic acidosis may require you to give up on the probiotic formulation that you are using.

But you may try replacing your current product with non-D lactate-producing bacteria.

However, if symptoms don’t clear up, you may have to take antibiotics.

In contrast, you don’t need to panic if you feel low due to bacterial die-off because the good bacteria are healing your gut dysbiosis, and you may regain your spark within 3 weeks.

Nonetheless, always consult your doctor if you notice unusual symptoms, and don’t self-prescribe medicines or isolated probiotic strains to yourself.

No doubt the fact that a healthy gut is essential for overall well-being. A large portion of our immune system, up to 80%, resides in the intestines and gut. This important ecosystem of bacteria...

Continue Reading
link to Collagen For Gut Health: Does it Improve? (types & benefits)

When you think of collagen (a protein), you often link it to the skin, muscles, connective tissues, bones, and even hair. It can help reduce the signs of aging, such as wrinkled, saggy skin and...